So, uh, how obvious is it that I’ve been reading Discworld? 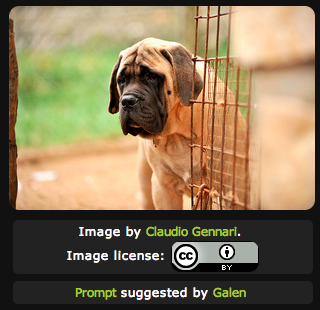 He was obviously part of the mob.

If you didn’t know the mob like Claudia did, you would have said that was a foolish statement. You would have looked down and not seen a mid-level member of the criminal organisation that secretly ran more than four-fifths of the city.

You would have seen a dog.

You saw the stance, the attitude, the carefully positioned hind-legs.

And more than anything, you looked into the eyes of the beast, and you saw the criminal mind at work.

Claudia was walking a new recruit, Jacques, around the scummy side of the city. It was dangerous, but Claudia wasn’t worried – she’d been here for long enough that the people knew not to mess with her. Even the mob wouldn’t touch her, as long as she didn’t interfere with their business.

(after more than a century on the job, Claudia had learned that upholding the law and interfering with the mob’s business were, more often than not, mutually exclusive.)

And so their walk-and-talk had led them past what looked like nothing more than a dog to the untrained eye.

Claudia wasn’t sure whether to smile or roll her eyes when Jacques bent down to feed him a scrap. The dog just stared at her; to Jacques it probably looked like disinterest, but Claudia recognised the disdainful stare of a mobster being patronised by a cop.