Many, many months ago (almost 2 years now) I very briefly ran a Dungeons and Dragons campaign. It was with a bunch of people I didn’t know very well, and it collapsed pretty quickly…but not before I’d put a day or two into building a world for it. 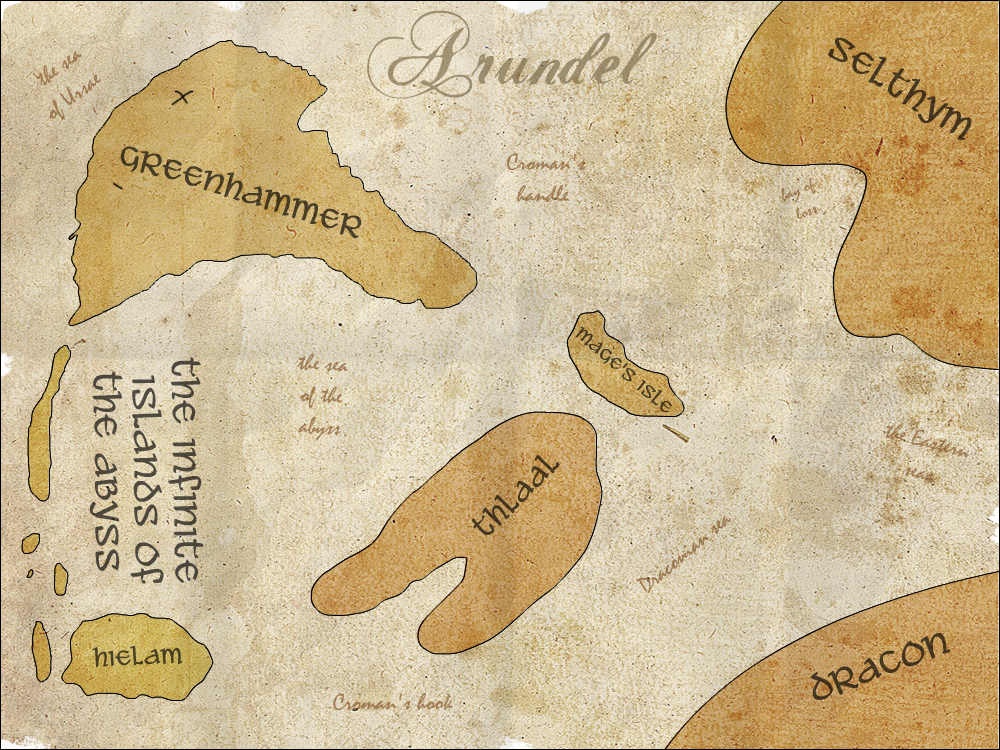 The world was built around the character histories that I was sent – I then told everyone (individually) all the facts that their character would reasonably know about the world. I just compiled all of the information into one post for reddit, so it might be a bit choppy but I thought I’d share it here too!

Feywild, Shadowfell and the Underdark:

The Feywild is a sprawling, land, a magical, strangely beautiful copy of Arundel. Passages between the Feywild and Arundel used to be prevalent, but many millenia ago the two were separated, with only six major portals now existing between the two planes. As a result, the only creatures in the Feywild are the native species; the Eladrin and the Faeries.

Shadowfell is studied intensely in the Feywild, but the only known method to get there involves first going through Arundel, a task attempted by few. As a result, the majority of knowledge of the Shadow Lands comes from books; it is believed to be inhabited by the “Dark Folk”, tall, thin, darkly twisted humans, and a mysterious race known only as the Ghostwise.

The Underdark is a series of underground caverns and passages that is known to exist in all three planes; in Feywild, it is called the “Feydark”, and is primarily full of glowing mushrooms, and the occasional Faerie community.

The Goddess Melora is known to have her own plane, accessible only through the Feywild. It is belived to be beyond the infinite ocean, but none have been known to go there and return alive.
The Underdark is a series of caverns, passages and oceans underneath Arundel, home to Dark Elfs (The Drow) the Dark Dwarfs (The Dueger), as well as various Orcs, Half-Orcs and Goliaths. There are points of contact with the Underdark right throughout Greenhammer, though most are guarded or blocked up.

Compared to the Fey, inhabitents of Arundel are mundane, and many Fey initially find them extraordinarily uninteresting.

Arundel is split into 6 main regions:

Greenhammer is the traditional home of the Humans, though it is also believed to be where Goliaths and Orcs originated.

Greenhammer and the Feywild was rocked two generations ago by the Drow Wars, a war that occurred when the Drow came up from the Underdark. The Drow tried to take Greenhammer, with limited success. To the surprise of most, Half-orcs turned against their own and fought alongside the humans against the invasion, resulting in their quickly being accepted by humans and integrated into mainstream Greenhammer society.

As part of the Drow invasion, they broke into Feywild, which is when the battle turned against them – the skilled creatures of Feywild took down the bulk of the Dark Armies, and then disappeared again as quickly as they had spilled into the world.

To help the Fey Army, Melora herself contributed a number of Holy artifacts: a Crest, a Sword, a Shield, a Bow, a Helm and a Chalice. Once the war was over, these artifacts were distributed between the schools that provided the mightiest warriors, held in positions of highest regard and honour.

Dracon has been the home of the Dragons for longer than history has existed. The Dragonborn were spawned when the blood of Io, the Dragon God, mixed with the dust of the world, to create a race of half-mortals, half-Dragons. Dracon is by far the largest of all the continents, with most of it inaccessible to anyone but the mighty Dragons – the Dragonborn live in the north-east corner, where they have made cities and villages and ships, and Dragons rarely lower themselves to tread.

Before contact with other races, the Dragonborn considered themselves scum, not even worthy to clean up after the mighty Dragons which dominate the land. After they met the first humans and the first elf, however, they realised that even though they in no way compare to the mighty dragons, they are vastly superior to any other creatures of the world. For many generations, the Dragonborn did not even allow other races to step onto the sacred land of Dracon, but in the past century, sentiments have changed – the advantages of trading with the elf and the dwarfs has become apparent, and some have even been permitted to set up house and market on Dracon.

Some Dragonborn have resented this, and tried to drive them out, but the majority are more accepting, and more and more the traditional Dragonborn are finding themselves unable to cope with seeing their beloved Dracon diluted like this, and leaving to explore the rest of the world instead.

On the continent of Greenhammer, Humans cities populated by humans and Half-orcs are commonplace. The war resulted a number of Goliath and Orc communities being set up on the island, but they largely keep to themselves, with most people still biased against them after their part in the Drow Wars. Dwarfs are rare, Elfs even rarer, and few have ever seen an Eladrin, Deva or Dragonborn. Passages to the Underdark can be found, but are not easily accessible (or if they are, they are never left unguarded.)

Trade is mostly between Greenhammer and Thlaal, with human ships dominating the sea of the Abyss. Explorers will occasionally venture into the Infinite Islands of the Abyss, but rarely return. Particularly adventurous traders will sporadically make it back from Hielam, with enchanted items and stories of its bright-skinned inhabitants.

Feywild has numerous ambassadors with the Elfs of Arundel, but very little contact with the other mundane races. The average Eladrin will only ever encounter other Eladrin in their long lifespans, though a lucky few will see (or even interact with) Faeries.

While there are no official guidelines on travelling to Shadowfell or Arundel, it’s rare for an Eladrin to desire this without a particularly compelling reason.

Most Dragonborn will encounter the mighty Dragons early in life, as a rite of passage is to travel out to the border of the desert, and sit until a Dragon is spotted. As well as this, the prevalence of dwarfs, elfs and humans in Dracon gives the average Dragonborn a familiarity, if distaste, for them.

Greenhammer is named for its lush, verdant forests and plains. The northern and western borders are covered in mountains, and the entire continent is covered in southern-flowing rivers. The majority of the Human cities are located on the “handle”, with the major trade points being dotted along the south-east coast.

An official map has never been drawn of the Feywild, and so most Eladrin know only their home area and the surrounding cities and towns.

Greenhammer is currently ruled by a king, though the Drow War exhausted his resources and his influence does not travel much futher than the capital and a few of the nearby towns. Most towns are ruled by the local Lord or Baron.

Feywild has no central seat of power, with each local area being ruled separately. The Faeries are known to have a Queen, but official contact with the Eladrin has neve been recorded.

The main Gods of Arundel are as follows:

Yhe humans once had their own God, but he was destroyed in the battle that sealed off the other planes. All record of his name was removed from history, and today he is only known as “He-Who-Was”. Humans typically don’t worship a god unless they have particularly strong social or family ties to another race.

The Eladrin uniformly worship Melora, Fey Goddess of the Sea.

Most people raised in Greenhammer only speak Basic. Sailors will often speak Dwarven as well, and those who fought in or study the Drow War will understand bits and pieces of Primordial, the language of the Underdark.

All Dragonborn speak Common, and Draconic, the language of the mighty Dragons. The latter is used only for pacts, weddings, and anything binding or holy.