I’m in a strange mood today, and don’t really want to do anything. So I’m forcing myself to write; I think today’s 6MS reflects that, not in quality, but in tone. Enjoy? 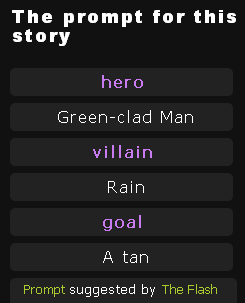 If only he could be one of those losers who didn’t know they were losers – a self-deluded idiot. Sure, they get laughed at by the world, but at least they’re happy in and of themselves. They don’t know that their dream is unreachable, that they’re doomed to spending the rest of their life watching something they can’t have.

Tom Hamil had been selling flowers for sixteen years at the same shop, in the same market, staring at the same girl. At first it had been a sort of cute crush – he’d look at the tanned beauty, imagine what it would be like to go over and talk to her.

Once the six-month mark had passed, he knew that he couldn’t go and introduce himself now. It had been too long, and he was okay with that. He didn’t know her name, but in his mind, he’d summoned up the courage to go over and chat, and now they were dating, “going steady”, maybe even talking about love.

After two years had gone by, Tom had started to grow aware of how sad his crush was. He’d started dreaming about the girl, picturing them moving in together, getting engaged. He sometimes wished that the dream wouldn’t end, that he didn’t have to wake up to a world where he’d never even said “hi” to the girl, where she knew him only as the guy in green…if she even knew that much.

After five years, she’d disappeared for a few weeks, and he’d simultaneously been crushed and pleased – he missed her, sad though that was, but maybe now that she was gone he could move on with his life.

When she’d returned, it had been with a wedding ring on her finger, and he knew that whatever infinitely small chance he’d ever had was now also gone.