This one started autobiographically but then the inspiration sparked and it went in a different direction. 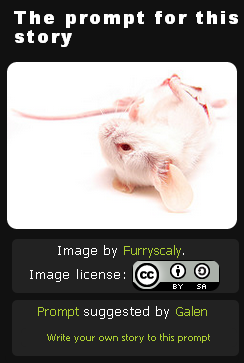 When I was a child, we used to have pet mice. The first one was called Snips and I don’t remember how or why, but we had it for a few weeks and then it died.

Snips died because he got in with the wrong type of animal.

Again, I’ll stress that this is all according to Grandpop, not something I saw with my own eyes. Grandpop will swear black and blue that it’s true, but he says that on the first night that Snips arrived home, the little creature found a way to escape the cage that my sisters and myself lovingly made for him, and worked out how to gnaw his way into the wall.

Into the wall where, in Grandpop’s words, “the rats abide.”

I never saw these abiding rats, but I did once or twice see mum putting rat poison out, so there might actually be a kernel of truth in the centre of Grandpop’s elaborate tale. Grandpop says (and I never questioned how he knew the details, but I’m sure he would have been able to give me an answer if I had) that Snips entered as the rats were playing cards in their abode.

Snips, being the friendly sort, asked to be dealt in, and to everyone’s surprise (not least of all Snips’) he was good. No, more than good. He was practically Rain Mouse. No matter what the game, no matter what he was dealt, Snips managed to bluff his way through, play the odds expertly, and by the end of the evening, the abiding rats owed Snips more than a house full of cheese.

The next morning, our first full day with Snips, I do remember him being tired, but I’m not saying that means that Grandpop’s story was true…