I like today’s. I didn’t feel any need to rush. It’s a repeated piece of stimulus, but quite a different story to the last time I used it. 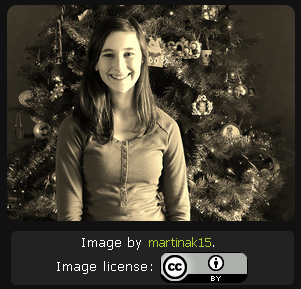 The sepia girl smiled at me as I tucked her photograph back into my wallet.

I’d found it several years ago, inside a book in a box on a table at a garage sale. I hadn’t ended up buying anything from the sale, but I’d taken the photo. I suppose you could say it was stealing, but I’ve never thought about it that way.

She seemed lonely. I was just taking her from a life spent between pages on the Ottoman Empire, with me. I travel a lot, and a part of me wanted her to see the world.

I know it’s just my imagination, but ever since I’d rescued her from a life spent reading the same few historical paragraphs over and over, something about her smile had seemed more genuine, less forced.

The first time, I’d been in the middle of Morocco, and I’d pulled my wallet out to pay for a trinket or a coffee or something, and seen her there tucked between my US bills and the local currency. I’d pulled her out, and shown her the world, so different from the one she was used to.

It’s just a photograph, I know that. But I gave her a name, and showed her the world, and it made me feel good. I’m not crazy, I’m normally not even sentimental. But why stop yourself from doing something silly and pointless if it makes you feel less lonely?

I call her Jane.