Today’s SixMinuteStory. This is the first time that I’ve reached the end of one of these and gone “Oh man, I want to know what happens next!”. Here’s the prompt: 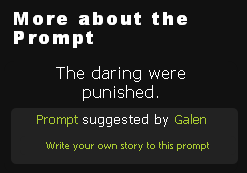 The daring were punished.

It seemed almost contradictory, but that was how They wanted it. Ever since the capital-t-They had taken over it, a systematic reduction of risk-taking had been put into place, until the daring were trained not to dare, the mavericks removed and replaced with the mundane.

My sister Joan had wanted to be a baker. You would think that was sufficiently uninteresting for Them, but you’d be wrong – I have no idea how They found out, but after a few bottles of wine at my house, she told me her dream of opening her own bakery. She hadn’t even applied for a loan yet, but They took her.

They took her, and They whipped her.

My sister Joan came back broken. She still smiled, but the laughter was gone, and so was the dream. When she was offered a position at one of the big chains, assistant baker in the back room, she leapt at the opportunity, and she even seemed happy.

Fortunately, I’ve never been daring. I’ve never had lofty dreams, never wanted to fly too close to the sun. I’ve always been happy enough with the status quo, and so for the longest time I assumed I was safe.

And then, of course, I met him.

He wasn’t even a high risk, but if Joan’s experience had taught me anything, it was that barely daring is too daring, and so as soon as I saw him, as soon as I realised my heart was fluttering and nervously wondered if he’d noticed me noticing him, I knew I was screwed.

He worked in painting, I was an accountant. It’s not Romeo and Juliet, but it’s daring enough…