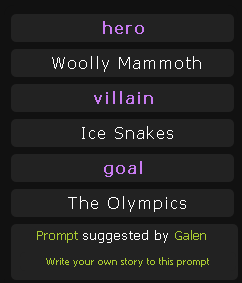 The chill of the water slowly crept up his trunk, until it reached his tusks. He couldn’t move…not that he even wanted to, any more.

He’d faced adversary ever since he’d announced his intentions. At first from his parents, then from his friends, until he was the laughing-stock of the whole herd.

“How are you going to pole-vault?” they’d sneered. “You don’t have any arms!”

“You think they’re going to let you in the Olympics!? Ha! You don’t even speak the same language as the humans…how are you even going to communicate your intentions?”

His parents had tried to discourage his dreams, and eventually turned away from him in disappointment. His friends had laughed, and soon been joined by others, until it was no longer the friendly laughter of mates, but the cruel jeers of a group of bullies.

But Trey had been undeterred.

He’d left the herd, he’d started off towards the nearest human village, and on the way he’d practiced. He’d vaulted over ice banks, and walruses…he’d vaulted over everything he could, and tried to vault over several things that he couldn’t.

The mammoth had been so enthused, so blinded by his passion that when the snakes – mortal enemies of his kind – had promised him that they had an “in” with the committee, he’d believed them.

And look at where it had left him. Under the water, freezing to death.