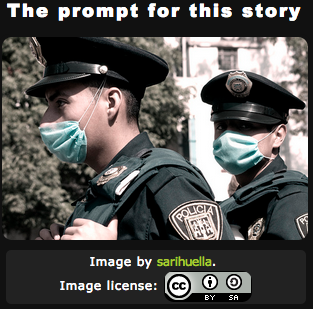 Officer Malone stopped at the doorway of the house.

“Do you smell that?” she asked.

The rest of the team paused as well. There was no reason for any unusual scent to be present, but they’d learned over time to trust Malone’s senses; she’d built up such a reputation for her instincts that some of the newbies were actually afraid to go near her, afraid that she’d be able to unearth some deeply-buried skeleton in their past.

No one did, but just to be safe, gas-masks were applied to everyone but Malone herself, and the team pressed forward.

The first body was laid-out neatly; hands across her chest, carefully placed on the bed. As if to contrast her, the other body hadn’t been cleaned, hadn’t been moved – and definitely hadn’t been preserved.

Malone reeled in disgust as the smell all but overwhelmed her sensitive nose, but didn’t run from the room, didn’t don the gas mask hanging around her neck. She gave herself a few minutes to adjust, and then sniffed once more.

“Mint,” she mused, but before she could investigate the unusual smell, spotted the gun.

She gestured with her eyes, and a member of the forensics team reached down to