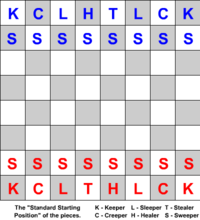 Ducart (or Ducarté) is a two-player game, played on a board of 64 squares arranged in an 8-by-8 square. At the start of a game, each player controls 16 pieces: two Keepers, two Creepers, two Sleepers, eight Sweepers, one Healer, and one Stealer.

The aim of the game is to be the only player with any Sweepers remaining; Sweepers can be removed from the game in two ways:

Sweepers are significant, because as well as deciding who wins the game, they are the only piece which can destroy, or "kill" another piece.

The first move of the first game is decided with a coin toss; players alternate first move for any subsequent games. A turn can be spent either moving a single piece, or using a single piece's Ability. Each piece has its own distinctive move pattern, and many have Abilities:

Some play a variant that whoever goes first has their Healer and the Stealer switched around; this is a common alternate rule, and is generally decided before the game starts. If there is any disagreement, then it is not applied, however if it is applied for the first game in a series of games, it must be applied for the rest.