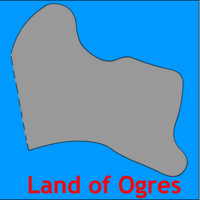 The Land of Ogres is the land where Ogres come from. It covers approximately half of Trolland, with the rest being covered by The Big Desert and kronktoN.

There are many bridges in The Land of Ogres, and even more roads. Too many roads, some say.

The Land of Ogres is split into four tribes; One Eye, Two Eyes, Three Eyes and Two Eyes.