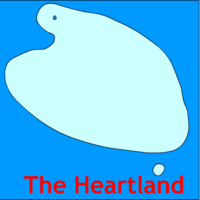 The Heartland is the Human homeland. It consists of the Island of Ile, and directly below that, the small Isle of Dane.

The Heartland is split into four regions: Anob Neeble in the top left corner, Sork Watch to the right of that, Badro Bunip below that, and Ach Nees in the bottom left-hand corner.

The Heartland is unique among the countries in that it doesn't have a capital, due to the warring nature of the humans. The Heartland's political system varies from region to region - Anob Neeble and Ach Neese are both run under a system of local lords and "kings" having power, while Sork Watch and Badro Bunip are not.

Cities of The Heartland

While the largest city of Sork Watch is the capital, Fire, the most popular tourist destinations are Talo and Nida, sometimes referred to as "The Twin Cities", perhaps because they are diametrically opposite. Talo is a lawful good city of rules upon rules, while Nida is a chaotic city with only 3 city laws. "Don't kill, don't fight, and if you're going to steal, try not to get caught." Similarly, while Talo's population are all easy-going, they are known to be a bit dim. Conversely, Nida, the city of loose morals that it is, attracts some of The Heartland's greatest thinkers.

The Heartland is bordered by three oceans - the Teagull Sea above, the Yujum Ocean below, and The Demographic Ocean to the left.